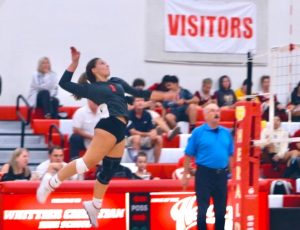 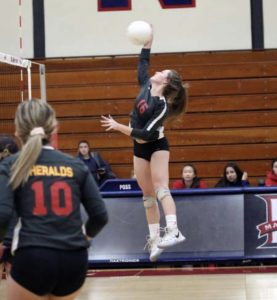 PrepVolleyball is an nationally recognized online source for all things volleyball-related. They provide news and information from high school to club to college volleyball, including rankings, recruitment and spotlighting the sport of women’s volleyball. Each year PrepVolleyball seeks out the top players nationally to recognize individual achievement at the high school level apart from club.  The top Sophomores are categorized into the top 79 players, with additional players given different levels of honorable mention.  This year there were a total of 566 sophomores chosen for this honor.

This is the second year in a row that Makena Morrison was selected for recognition at her grade level.  Last year she made the national top Freshman list.  This season Makena compiled 419 kills, which broke the school’s single-season kills record.  In addition, she broke the single season kills in a match record, with 32 total.  She also collected 62 serving aces and 268 digs. Makena was the “go-to” player for her team, and the one person every opponent knew they had to try to stop.

This is the first time that Haden has made this list.  Although her primary position is a setter, she was needed as a hitter and passer in 0rder to make her team better.  It is every setters dream to be a hitter, and Haden jumped at the opportunity and gave everything she had to make her team better.  This season Haden amassed 243 kills, 257 digs and a team leading 69 serving aces.  She is a complete player who passes, serves and defends well.  Above all, her on court volleyball IQ gives her an advantage over her opponents.