Whittier Christian High School (WCHS) announced Zac Cokely as the new Head Coach for the Boys’ Basketball Program. He will lead the WCHS Boys’ Varsity team and direct the program as it begins preparation for its 2019-2020 campaign. Cokely’s just finished a successful season as the Girls’ Basketball Head Coach at nearby Santa Fe High School. Cokely inherited the program with a 12-39 record, but by his second year, he led the team to a 23-9 record in 2019 and Division 4A CIF Championship. They qualified for the California State Tournament and advanced to the second round. Following the 2018-2019 season, Cokely was honored as the CIF Coach of the Year and named the Whittier Daily News Coach of the Year.

Cokely is respected by fellow coaches for his technical mastery and game management, as well as his ability to drive long-term player development. He is a graduate of WCHS (Class of 2011), and played football, basketball and volleyball during his high school career. He began his coaching career in the WCHS Boys’ Basketball program, and later worked as an assistant coach under Mike Lowe at Rio Hondo College.

Carl Martinez, Head of School, says, “Coach Cokely has a passion for the game, an undeniable work ethic, a care for his players, and a genuine faith that he lives daily. Those qualities are evident in the way he coaches and were a key factor leading to his success at Santa Fe. We’re confident that those very qualities will be transformative in the lives of our student athletes.”
Incoming Head Coach Zac Cokely is eager to begin his new post: “The opportunity to lead a program with so much history and so much potential is a rare one. There is something very special about the WC community and I am honored to become a part of it again.”

Founded in 1958, Whittier Christian High School has a 60-year heritage and more than 5,000 alumni around the world. WCHS is recognized for its Christian commitment, academic achievement, and focus on athletics and the arts. In addition to 27 CIF Player of the Year awards, since 1970 the school has won 126 league championships, and 18 CIF Championships and 2 California State Championships. To learn more about WCHS, call 562.694.3803 or visit the school’s website at wchs.com. 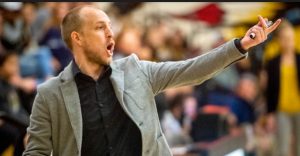